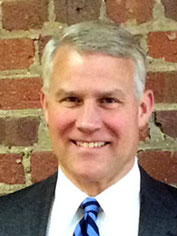 Jim works together with business leaders to help them address complex business issues and to resolve disputes, including complex litigation and class action cases.  Jim has practiced law in both public and private sectors.  He served as Vice President and Associate General Counsel for a Fortune 250 company, he served as a City Attorney in Virginia, and he has been a partner in law firms.  He is admitted to practice before the United States Supreme Court, and he is licensed to practice in several jurisdictions.

As City Attorney, in Virginia, Jim served as General Counsel to the City government, advising the City Council and staff on all municipal issues, including land use, zoning, employment, real estate contracts,

Jim counsels banks and other financial services companies in matters related to administrative, regulatory, and legal compliance, including data privacy/security, records management, and electronic discovery.  With over twenty-five years experience in trial and in-house work, Jim’s background allows him to counsel his clients on complex legal issues, with an understanding of business needs and objectives and with a dedication to common-sense problem solving.

Jim graduated from the United States Military Academy at West Point, where he was selected as the First Captain, Commander of the Corps of Cadets.  He completed Airborne and Ranger Schools, and commanded several combat-ready Cavalry platoons.  After five years on active duty, Jim received his law degree from the College of William & Mary, at Marshall-Wythe School of Law.

Jim remains active in his community. He serves on the Board of Directors for West Point AOG. He is Founder and President of American Heroes for North Carolina, a non-profit community effort designed to transform the lives of veterans and to create benefits for our communities by integrating veterans and by recognizing the contributions of our veterans.  He serves on several Board for local organizations, including development companies and non-profit companies.  Jim resides in Greensboro with his wife, Mary Ann, and their son, Josh.